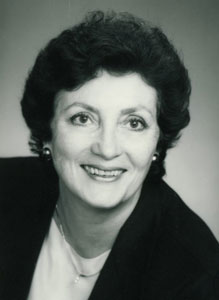 The founder of the March For Life of Washington state was a tireless crusader for life. Her spirit lives on in the fight we continue in her memory. Kathy McEntee, our beloved wife, mother, grandmother and friend, joined the angels and the saints on Jan. 12, 2008. She was 69.

Katherine Marie Jones was born April 5, 1938, to Ann and Paul Jones in Teaneck, N.J. She was the first of their six children. She graduated from the Academy of the Holy Angels in Fort Lee, N.J., and Dunbarton College of the Holy Cross in Washington, D.C. She earned a varsity letter in college for basketball. She was a model for Saks Fifth Avenue before becoming a teacher. She taught elementary school in Short Hills, N.J. On Oct. 20, 1962, she married John Richard “Dick” McEntee, the man she called “my hero.” They lived in New Jersey until 1964, when they moved to Cobourg, Ontario, Canada.

In 1967, they moved to the Tacoma area with three children and one on the way. It was here they would settle, raise and expand their family and make many friends. Kathy‘s pride and joy were her six children: Rich, Ann, Paul, Aileen, Kate and Noreen. She was their mom and their best friend. With six kids, her home never lacked for activity. She welcomed every child’s friend with open arms. She was a devoted friend and second mother to countless people. Her friends were zealously defended, and there was always room for more at her dining room table. She wasn’t just her kids’ mom; she was everyone’s mom. Kathy was a proud Roman Catholic, devoted to her faith and being a lay leader in her community. She was a 40-year member of St. Charles Borromeo Parish in Tacoma. She was proud that St. Anthony’s Guild was founded in her grandparents’ dining room.

In the 1970s, Kathy and Dick became involved in the pro-life movement in Washington. They worked with the Voice of the Unborn and Human Life of Washington. In 1978, Kathy began Washington State March for Life. Every January, she brought people from around the state and legislators to the steps of the state Capitol to rally for the unborn and proclaim, “All life is sacred from conception to natural death.” Her pro-life work kept her busy. Almost every year she went to Washington, D.C., to help with the national March for Life, and in 1986, she met President Ronald Reagan. She became an expert on life issues and spoke around the region.

In the 1980s, Kathy and some friends ran a thrift shop in Tacoma to raise money for Human Life of Pierce County. She welcomed pregnant women into her home and counseled women. Kathy never drew a salary for her work; any money raised went back to March for Life. In addition to pro-life work, Kathy was involved in many community activities.

In the 1960s-70s, she and Dick were part of Tacoma Opera Society and Tacoma Opera Guild, helping stage productions and bring opera to Tacoma. She was a member of Catholic Daughters of the Americas, Archdiocesan Council of Catholic Women and Tacoma Catholic Women’s Club. She served as province director for the National Council of Catholic Women. She coached a boys’ baseball team at St. Charles Borromeo School. She started the school auction at St. Charles in 1982. She was a chairwoman of the St. Joseph Hospital Ball. She was a member and past captain of the 9-Hole Ladies group at Tacoma Country & Golf Club. She served on the board of trustees at Saint Martin’s University. She was a substitute teacher in Pierce County schools.

In 1985, she assumed a fifth-grade classroom at St. Charles when the teacher died. She loved teaching, and she loved her students. While Kathy was noted for her pro-life work and community activities, she was always a wife and mother first. She and Dick were a true team. Her family is thankful for her example and inspiration.

“Come to me, my faithful servant, and rest.”

On June 20, 2010, Richard McEntee was taken home to the Lord.  As a founding member of the Washington State March for Life, he was a tireless crusader for life.

Henry Hyde said, “When the time comes as it surely will, when we face that awesome moment, the final judgment, I’ve often thought, as Fulton Sheen wrote, that it is a terrible moment of loneliness. You have no advocates, you are there alone standing before God – and a terror will rip through your soul like nothing you can imagine. But I really think that those in the pro-life movement will not be alone. I think there will be a chorus of voices that have never been heard in this world but are heard beautifully and clearly in the next world – and they will plead for everyone who has been in this movement. They will say to God, ‘Spare him because he loved us,’ – and God will look at you and say not, ‘Did you succeed?’ but ‘Did you try?'”

Richard tried, and gave, and encouraged, and built, and witnessed and loved, laughed and lived. That chorus of voices will be a powerful consolation for him as we entrust him to the Mercy of the Lord of Life.

Kathy and her husband Richard “Dick” are survived by  their six children and spouses: Rich & Jill McEntee; Ann & Mark Wiegman; Paul & Kari McEntee; Aileen & Rob Carrell; Kate & John DeWeese; Noreen & Louis Hobson, all of the Tacoma area; 12 grandchildren: Jack, Maggie, Peter, Emily, Sally, Sarah, Ryan, William, Clare, Gwenyth, Marie, Daniel, and Thomas. She is survived by her five siblings, Elizabeth McIntyre, Patricia O’Rourke, Paul Jones, Dan Jones and Bill Jones, all of the East Coast, and their spouses, and many nieces, nephews and friends who loved her dearly. She was preceded in death by her parents and a granddaughter, Lucy Marie Carrell.